Looking Back – Remembering Our History
The West Suburban-Milwaukee Branch of AAUW began in 1957 when a small group of women from the Elm Grove-Brookfield-Wauwatosa area decided that they needed a way to stay connected to the world of ideas. It was the era of stay-at-home moms, single car families, shirtwaist dresses and pumps a la June Cleaver. The concept of ‘having it all’ wasn’t yet on the horizon and men and women had rigid roles. College educated or not, married women typically did not work outside the home, particularly once they had children and their lives often felt cramped and unstimulated.

On March 27, 1957, Beth Almon of Elm Grove—always referred to as Mrs. John Almon in press releases and the print media—invited some like-minded women to her home to discuss ideas for bringing women together in a meaningful way. With over a dozen in attendance, they talked about AAUW and the possibility of starting a new branch to serve their suburban communities and interests. It would be fair to say that enthusiasm was high. In less than two months the group took their first formative step holding an organizational meeting at St. Edmund’s Episcopal Church.

Forty-two Women Attended
In attendance were 42 women along with state AAUW officers who helped guide the conversation and answer questions. Bylaws were proposed, $7 annual dues were set ($3 National, $1 State, $3 local), and the Elm Grove Branch name was accepted along with a meeting time (second Wednesday of the month). The rest of that summer a temporary committee worked through the application process.

Although the new branch wasn’t officially recognized until October, the first branch meeting was held on Wednesday, September 11, 1957, 8 p.m.—with refreshments!

On the agenda for the evening was a panel discussing AAUW activities including study groups: the Arts, Primary and Secondary Education, Higher Education, International Relations, the Fellowship Program, Legislative Programs, the Status of Women, Social and Economic Issues, and Mass Media. The very full agenda included officer elections.

At the October meeting, the officers were officially installed and study groups were assembled. What would later become the West Suburban Milwaukee branch was off and running.

Looking Back at Our Collective History: Part II
Many of today’s young women are skeptical of the term “feminist” and question the concerns that older women share. They take for granted the privileges we in the westernized parts of the world have, and they assume things have always been this way. The events and efforts that brought us here have been forgotten.

Today, it’s hard to believe that women first got the right to vote less than 100 years ago. That was a major breakthrough won by generations of women fighting to make their voices heard. But that is only the most widely known battle on our path to equity. There have been many other battles, equally hard fought and many ongoing.

The Equal Rights Amendment (ERA), another long-term battle, was first introduced in 1923.  It passed both houses of Congress in 1972 and was nearly ratified by the states when conservative organizer Phyllis Shafly brought strong opposition in the name of housewives. Thirty-five of the required 38 states ratified it before the 1979 deadline (Wisconsin was number 14) but it was shelved and is now mostly forgotten.  But not by everyone. One of our members has vivid memories of the Waukesha march she participated in as a member of the League of Women Voters:

The fight continues. ERA has been re-introduced into every session of Congress since 1982. While Wisconsin ratified the federal amendment, our legislators have never passed a state ERA.

Another long and ongoing battle is the demand for equal pay. While things have improved overall, the pay gap between men and women has not yet gone away. Several of our members remember personal experiences with blatant pay inequity just a few decades ago:

One area of success for women was the 1972 passage of Title IX which required all federally funded education programs to provide equal treatment of girls and women in all programs and activities. While there are persistent problems with enforcement, the fact is that girls can now participate in all education activities on equal terms with boys. This opportunity has given many young women experiences never available before.  Prior to 1972, sports opportunities for girls were spotty and treatment was second class at best. Some of our members remember those years:

But there were other forms of discrimination in education that were perhaps subtler but often more difficult to work through.

Girls and women frequently had to stand up for themselves to achieve what they wanted – sometimes with support but often without.

Those members were strong and overcame opposition, but not all girls and women are able to do that. Jobs and roles were much more strictly defined according to gender. Girls were often stifled and counseled into one or two fields that were perceived as “family-friendly”:

Participation in activities outside the home often required special permission or understandings from the men in their lives. In public, women were referred to by their husbands’ names. (There’s plenty of evidence of that in the press clippings in our archives from the 1950s, 1960s and into the 1970s.)

And then there is the still divisive issue of reproductive rights. The introduction of the birth control pill in the 1960s freed many women from the worry of unwanted pregnancies and the sexual revolution that followed cleared the path for a more open-minded attitude toward pregnancy. Many of our branch members remember when this wasn’t the case:

Women’s history has been fraught with set-backs and confrontation. Even within our gender there is no universal agreement. Women have sat on the opposite side of the table on more than one of these issues and will undoubtedly continue to long into the future. Being aware of what has come before, keeping our history alive, sharing what we have witnessed with the young women who were not standing on those picket lines with us – will perhaps lift the stigma that the word feminism holds for some younger women today and keep us moving forward. 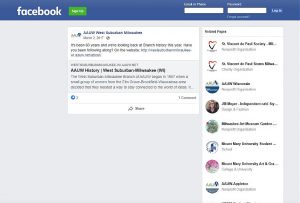